A master plan is a dynamic long-term planning document that provides a conceptual layout to guide future growth and development. Master planning is about making the connection between buildings, social settings, and their surrounding environments. A master plan includes analysis, recommendations, and proposals for a site’s population, economy, housing, transportation, community facilities, and land use. It is based on public input, surveys, planning initiatives, existing development, physical characteristics, and social and economic conditions.

Master planning can assume some or all of these roles:

As city regeneration initiatives are generally long-term propositions, it is important to consider the master plan as a dynamic document that can be altered based on changing project conditions over time. For example, in the case of the Santiago repopulation program detailed in this volume, the municipal master plan was modified 29 times during the implementation phase. These changes sought to either allow for more density and height in some areas, or to restrict and lower the height of the buildings—including the definition of areas under patrimonial protection (Arraigada, Moreno, and Rovirosa 2007). This flexibility has been beneficial to the real estate sector, enabling increases in the number of floors and housing units per building.

Master plans can have an important role in determining the shape of the urban environment. If not well conceived, they can lead to problems in the future. For instance, one of the criticisms of Santiago’s master plan was that it was too flexible in setting standards for beautification and building volume design. Hence, the quality of these buildings in terms of architectural design and construction materials was considered one of the weaknesses of the repopulation program (see photograph). The residents also criticized the unpleasant contrast of the high tower buildings with the existing historic urban fabric, as well as the fact that the new towers are not well integrated within the traditional neighborhoods. All of these issues could have been addressed well in advance as part of the master plan.

Photograph: Lack of attention to urban design, building heights, and massing brought on criticism of the Santiago Repopulation Program. 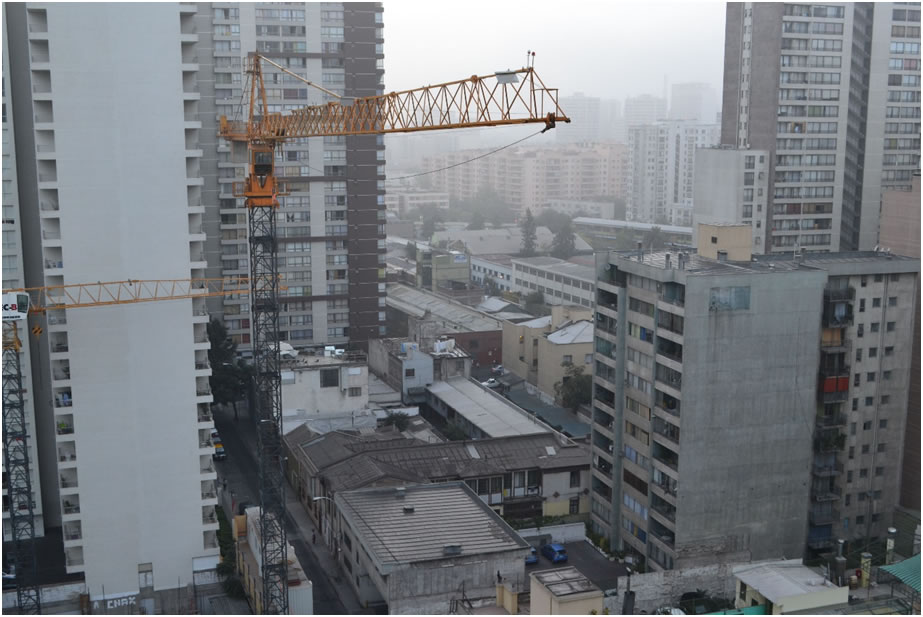 The Process of Developing a Master Plan
Depending on the role of the master plan, it could have various sections and be developed in several ways. However, some common denominators for a good master plan are explained in this section (see figure).

Feasibility Study: The feasibility study is an objective review of available options for development. It includes findings, analysis, and conclusions from the visioning and scoping exercises for a given site or inner-city area. It indicates whether the chosen site is suitable for the intended function, taking into account the financial, social, and environmental aspects of each proposal. Many comprehensive master plans start with a feasibility study in order to understand the site’s geographic, environmental, and historic context. This process builds on the information collected and analysis developed during the scoping phase. Any background reports that are deemed necessary (that is, hydrology, environment, cultural heritage, transport, and so on) should also be commissioned at this stage to inform the master planning process (Blackmore 1990). 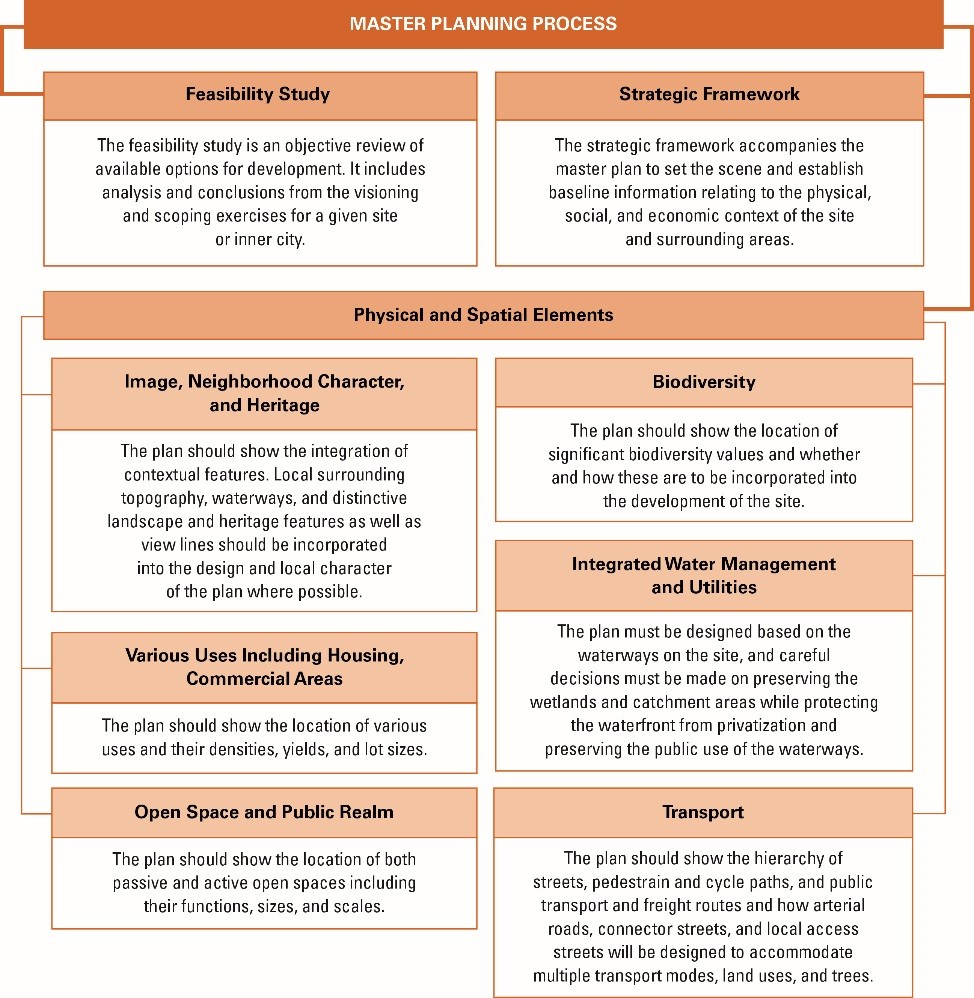 In the case of the Sabarmati Riverfront Development Corporation in India, the board commissioned a feasibility study be conducted by a local nonprofit environmental planning group. This study was completed within a matter of months. The study assessed the feasibility of the new proposal for constraining the width of the existing river. The proposal, as outlined in the 1997 study, specifically called for constraining the width of the existing river to 275 meters. The river’s unconstrained width varied from 340 meters to 600 meters throughout. The study found out that the land reclaimed through this river training would be about 162 hectares (which subsequently increased to 200 hectares) spread along 9 kilometers (km) (which subsequently expanded to 12 km) along the west and east banks of the river. According to the feasibility study, the sale of 20 percent of this land would finance the entire cost of the project, whereas the rest of the reclaimed land could be used for public benefits, such as new streets, parks, and other city amenities. A key feature of this proposal was a continuous promenade along the east and west banks of the river. The study also proposed implementation mechanisms and financing strategies.

Strategic Framework. The strategic framework accompanies the master plan and sets the scene in establishing baseline information related to the physical, social, and economic context of the site and surroundings. This background information should outline the site location and dimensions, topography, and existing uses. It should highlight the current zoning regulations and relevant/applicable planning policies, as well as any particularly important opportunities and constraints relevant to the site (CABE 2008; Growth Areas Authority 2009). In summary, the strategic framework includes:

The strategic framework is critical for developing a sound spatial master plan in the next stage. It includes all of the studies and analysis that are needed before entering the design phase, especially urban design analysis, which provides options for various urban form scenarios.

Physical and Spatial Elements of a Master Plan. Once the feasibility study and strategic framework have been undertaken, the physical master planning process continues. Based on the first two phases, master plans establish and develop options for land use, which will later be translated into three-dimensional models to identify the resulting development needs, as well as costs and values. In summary, the spatial master plan should include elements such as massing, height, densities, orientation, grids and blocks (without architectural or style details) transportation systems, and open spaces (CABE 2008). The master plan should also cover some or all of the following elements to ensure an overall holistic and successful design and use outcome:

What determines the character of an urban area?

Urban designers and architects have used the term “character” or “sense of place” since the early days of urban design. But what defines the character of a place and what impacts it? According to Kevin Lynch, neighborhood character is determined by its history, cultural identity, landscape, and architecture. Character also means that the urban area is remarkable and coherent in a way that serves as a basis for pride, affection, and a sense of community. The character of a place is influenced by many factors, including: