It is helpful if local officials have some kind of an idea as to the value of their public land assets. Many countries use the recorded acquisition value for valuation of land. The downside of this method is that it could lead to assigning a zero value for publicly owned land because it was transferred from the national government to the municipal government. This is problematic, because in the case of leveraging public land for urban regeneration, the true value of this land is unknown. Hence, it can be given away without ever recording a loss on the balance sheets (Peterson and Kaganova 2010).

Market valuation of public land is a costly exercise. Land value appraisals are quite expensive, especially given the large inventories of land owned by governments. The volatility of urban land market values requires frequent updates, most likely on an annual basis. Nevertheless, some countries have started to find solutions to this problem. In South Africa, publicly owned land goes through the same market valuation as privately owned land. In the case that land is used to provide infrastructure, the same rules in valuation apply to the private and public sectors. Another example of this is found in Kuwait, which requires that any public land parcel to be used as an equity contribution for a public-private partnership (PPP) project must be appraised by two independent appraisal companies, and these valuation estimates must be available to the public (Peterson and Kaganova 2010).

While the total valuation of public land stock may be unrealistic and inefficient, at the very least, the city governments can develop methodologies to identify, categorize, and map public land owned by various public entities in their boundaries. It is also important that this public land be categorized in various clusters based on its potential for development and marketability. One example of such inventories is detailed in box and map.

Inventory and valuation of public land assets in Ahmedabad, India

In a unique study, the public land assets in Ahmedabad were systematically inventoried and their value estimated using the geographic information systems (GIS) and land records. This project involved collecting information and consulting with relevant agencies to obtain existing maps and documents related to town planning schemes and cadastral records. It also involved urban planning professionals, GIS technicians, cartographers, and land assessors. It is notable that the land information system created using the GIS was not an end in itself. Rather, it was a means to analyze and build scenarios for policy decisions and land asset management. In this regard, it is important to note that this study was undertaken by a unique team of knowledgeable experts and that India has a well-developed real estate market and related professionals, including skillful appraisers. Replicating this study in some other countries with a less-developed real estate market and industry may not be as successful.

The study classified public land as land owned by the state of Gujarat, the Ahmedabad Municipal Corporation, public institutions, and the central government. The public land resources were identified by the following: (a) town planning schemes, (b) cadastral records, and (c) field surveys. This data was later incorporated into a GIS database to show the geographic distribution. A summary of these findings can be found in maps below. 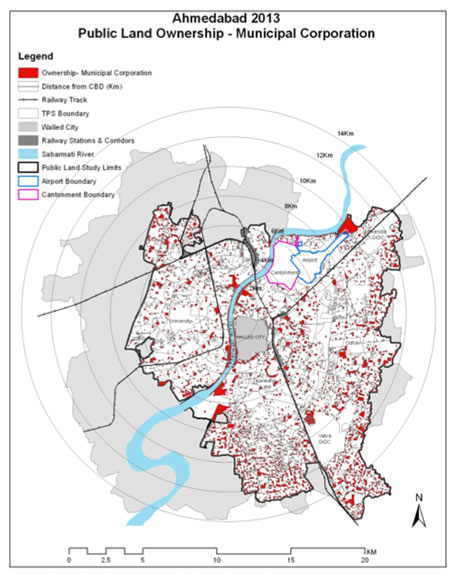 The study clearly showed that Ahmedabad possesses a sizable amount of public land—amounting to 32 percent of total buildable space in a city known more for its vibrant private sector than for its large government presence. The study found out that the financial resources that could be generated by monetizing public land ranged between rupees (Rs.) 20,000 crores and Rs. 54,000 crores (about US$3.6 billion and US$9.8 billion, respectively).

With a population of nearly 6 million, the amount of public land available amounts to a per capita availability of fiscal resources totaling Rs. 36,000 to Rs. 97,000 (about US$700 and US$1,800, respectively). To put this in perspective, a 2005 city development plan estimated capital investment needs for a seven-year period at about Rs. 9000 crores. The minimum value of inventoried public land is over twice this estimate. Therefore, this study clearly establishes that monetizing public land could significantly contribute to investments in infrastructure and other high priority government goals.

It would be difficult to take on any of the land and finance tools described in this volume without at least having a basic land valuation method in place. Sound valuation of land—either public or private—is essential to building a tax system and developing functional real estate markets.

In general and in most parts of the world, land is undervalued. For example, in the United States, properties are assessed on average at 33 percent lower than their market value (Lozano-Gracia and others 2013). In the developing countries the situation is less desirable. In such cases, the bidding process in land auctions is usually used to uncover the true land value.

There must be a clear, fully transparent, and defensible process for determining the value of land. Establishing such clarity is critical so that when land is used for urban regeneration, there are not accusations of corruption, excessive subsidies, or insider deals. In determining the value of land, best practices indicate using outside appraisers so there is an independent basis for land disposition.

The local government may decide to subordinate a certain amount of the value of the land to achieve higher returns at a later stage of the project. Alternatively, it may leverage land value to support the cost of infrastructure or the provision of social benefits, such as affordable housing. However, all the value of these “public goods” should be calculated on the basis of an independently determined assessment. Even for multiphased projects where the future value of land is uncertain, there should be an independently assessed baseline from which to decide on either a fixed value that escalates over time, or a process to revalue land at subsequent stages of development.

The importance of having a transparent and credible method for determining value cannot be over emphasized. It is the basis for all negotiations. It is also critical for the public sector so that it can evaluate the costs and benefits of the key financial and social objectives associated with the regeneration project. For example, the value will determine how much land the public sector is willing to allocate to subsidize higher quality design, small businesses, affordable housing, or public infrastructure.

Although valuation is of high importance, it is unreasonable to expect that all public land assets would be appraised. In this regard, the exercise of valuation of all public land that was done in Australia and New Zealand has been strongly criticized (Kaganova 2012). Instead, local governments can take on valuation of public land when the main public land sites are determined to have potential for reprofiling for private use, when the local government owns or has been given surplus land, and when a specific parcel of land is being used in an urban regeneration project.