Urban redevelopment is conceptually similar to land readjustment, with the exception that it happens in existing urban areas and often involves a rezoning by the government of a given area from a low-density (single-family housing) to higher-density (mixed-use or commercial) development. It is also accompanied by a provision of infrastructure improvements (mass transit, such as metro lines) that can support such up-zoning.

As part of this process, a government assembles the individual private properties and undertakes a new higher development plan and delivers the necessary infrastructure. At the end, the government returns to each landowner a share of the overall new development that is equivalent to their original land or property ownership. It retains a share of the development that it then sells to recover the cost of the infrastructure improvement.

Japan has a comprehensive scheme for implementing this tool under its Urban Redevelopment Law. This scheme allows landowners, tenants, and developers to use the opportunity of new transit development in built-up areas to create development opportunities. The government helps with and benefits from this process by changing zoning codes from residential to mixed-use, while also allowing for up-zoning. For details of this scheme, see box below.

A Hypothetical scenario using the urban development scheme in Japan

Imagine a hypothetical situation in which a government wants to bring a new metro station to a neighborhood consisting of small land parcels owned by various individuals or rented by tenants. The individual parcels are small and the neighborhood is generally low-rise, consisting of various one- or two-story buildings. A new metro station can create tremendous economic value for the land, some of which could be leveraged to finance the new metro. However, the individual land parcels are too small to be able to use the economic value through densification, and some kind of land assembly is also required. The national government finances a third of the site survey, land assembly, and open space foundation costs using the national general budget, and half of the public infrastructure costs using the roadway special fund.

To use the value created through transit development, the government upzones the site, changes the zoning code from residential to mixed-use, and plans denser development using the assembled land parcels. The development will include a tall building, an underground metro station, and associated public infrastructure (wider roads, public spaces, and amenities). Landowners and tenants are entitled to keep the property rights of floor spaces in the new building that are valued as equal to their original property. However, each landowner can also sell all of their property rights to developers. The “surplus” floor area permitted by the municipal government is then sold to cover the costs of the new development and public facilities. The figure below illustrates this hypothetical situation, and the table summarizes the contributions and resulting benefits of each of the stakeholders in this process.

Figure: Illustration of a hypothetical urban development scheme in Japan 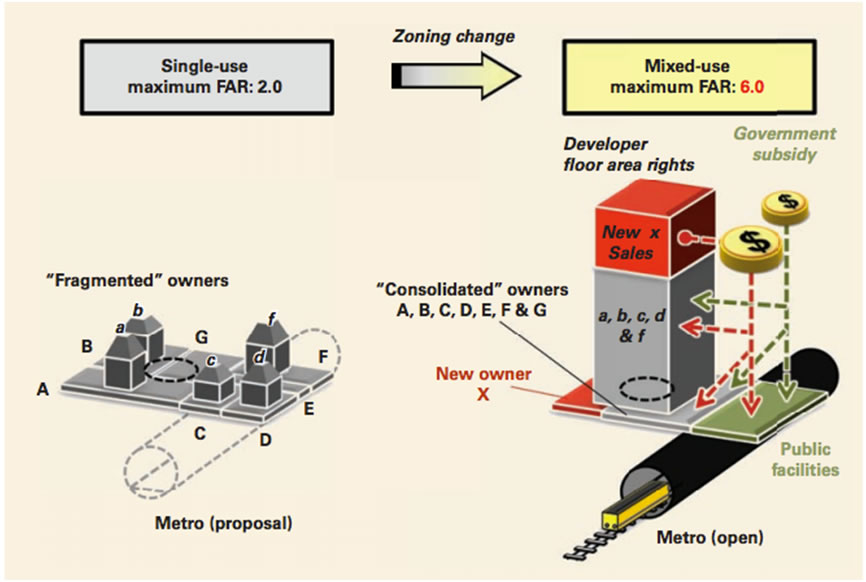 Table: Benefits and contributions of various stakeholders in a hypothetical urban development scheme in Japan