Land readjustment is an approach that is commonly used in East Asian countries, such as Japan and the Republic of Korea. In addition, it has also been used in Germany to enable the assembly and planning of privately owned land at the peri-urban fringe, as well as the delivery of infrastructure and services on such land. Using this approach, the government pools or assembles the various privately owned land parcels in a given area and prepares a land use plan for the overall area including designating spaces for public infrastructure and services such as roads and open spaces. It then implements the plan and provides the necessary trunk infrastructure. At the end of the process, the government returns to each landowner a land parcel proportional to their original parcel but of smaller size (for instance, 50–60 percent of the original land parcel)—except that the new land parcel is of a higher value because it is now serviced urban land. The government retains selected strategic land parcels that it auctions or sells at market rates for cost recovery of its investment in infrastructure and service delivery (see Lozano-Gracia and others 2013). Land readjustment is a very useful instrument in urban regeneration projects involving private land and fragmented land ownership. The box and figure below describe the land component of the Sabarmati riverfront regeneration project.

Land readjustment and compensation in the Sabarmati Riverfront Development

In the Ahmedabad, India, case study, a process of land readjustment called Melavni, which means “to match” in the local language, is documented. Melavni is a part of the process of town planning schemes by which the records of land ownership are reconciled between paper records and the actual on-the-ground ownership verification of land (Ballaney 2008). The first step of this process is to prepare an accurate and detailed survey of the area (see figure). 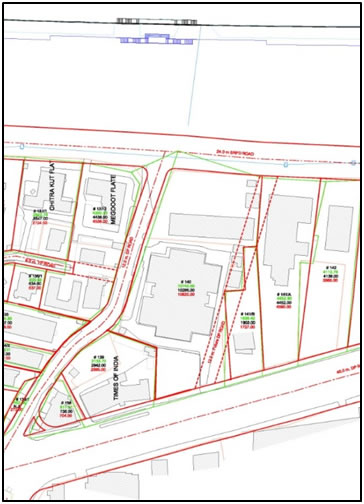 Simultaneously, paper records of land holdings are digitized. The two are overlaid against one another, as well as against the proposed plan for the area. This overlay plan helps clarify the differences between the three and helps identify the owners’ compensation rights. During the Sabarmati regeneration project, the planners used the Melavni process to develop an overlay plan. Planners then determined whether a particular land parcel adjacent to the riverfront was impacted by the regeneration project. Impacted land parcels were those whose area was reduced by the new plan. The project team met with individual landowners of the impacted parcels using this overlay plan and reached an agreement regarding compensation. All impacted landowners were offered two compensation options. First, they were offered development rights for the lost area of land. Second, if they did not want to be compensated with development rights, cash compensation was offered. Most of the impacted landowners chose to be compensated with development rights, as the value of these development rights would appreciate significantly over time, whereas the value of the cash compensation would diminish over time.

Land readjustment is an effective tool in allowing local governments to take on regeneration projects through increased land values while engaging and involving the original residents and landowners as stakeholders. Therefore, it is a good tool for stakeholder engagement. It is also beneficial for the government because it does not require a massive up-front investment to buy the land from the owners. However, land readjustment needs strong local institutions and a sound legislative framework to be implemented effectively. Another challenge is obtaining the consent of all existing landowners for the regeneration project. Furthermore, the land readjustment process involves valuation of the land. It is generally difficult for the government and the landowners to reach agreements on the true value of the land.