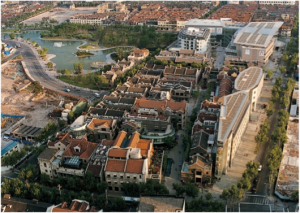 The city of Shanghai, one of the major economic and population centers of China, has undergone a dramatic urban expansion and redevelopment of its downtown precinct since the 1990s. Much of this change can be attributed to the demolition of entire dilapidated neighborhoods, the relocation of communities, and the construction of modern towers. This profit-driven redevelopment model proved easy to implement, but had little regard for the preservation of the urban fabric or the historically significant identity of the city. The Xintiandi area, located in the neighborhood of Taipingqiao within the Luwan District of Shanghai, was the first neighborhood not to follow this model of urban regeneration.

The Xintiandi site was developed according to a master plan, with the goal of commercial development based on the conservation and utilization of a certain portion of traditional “Shikumen” style architecture, as well as a neighborhood layout known as “Linong”.

The total land area of the Luwan District in which Xintiandi is located was about eight square kilometers, with a total population of 248,779, residents in 2010. The first leasing of land for export sale housing (land which could only be sold to foreigners) took place in the Luwan District in 1992. It was developed as a pilot project to attract foreign investment into urban regeneration projects. New rules and procedures for regulating and promoting land leasing, real estate development and infrastructure construction were a part of the “Shanghai Temporary Regulation for Adopting Foreign Investment in Domestic Market Housing Program,” formalized in 1995. This set of regulations aimed at integrating foreign investments in housing that were then sold to local residents. As a result, 1.8 million square meters of dilapidated and shanty housing were demolished to make way for new, market-rate housing projects.

In 1997, the Asian Financial Crisis resulted in a slow down of foreign investment, including in redevelopment projects. In response, the Shanghai Municipal Government announced new preferential tax policies and the provision of particular types of financial support to the remaining sites of the 365 Program. Overall, between 1991 and 2000, a total of 28 million square meters of dilapidated housing were demolished and 640,000 households relocated.

The Luwan District Government directly approached the Shui On Land Limited (SoLL) company, a Hong Kong developer, with the idea of developing a redevelopment plan for the Taipingqiao neighborhood. In 1996, SoLL hired the American architectural firm, Skidmore, Owings and Merrill (SOM), to develop a master plan for the entire Taipingqiao neighborhood. The master plan was developed by SOM with inputs from SoLL and the Luwan District Government. It was then submitted by the District Government to the Shanghai Municipal Government’s Urban Planning Administration Bureau. The planning officials at the municipal level reviewed the plan and brought together a cross-section of stakeholders to discuss and reach agreement on the proposed redevelopment vision.

At the end of 1997, SoLL signed an agreement with the Luwan District Government under the supervision of the Shanghai Municipal Government outlining the area and location of the project and the conditions under which the government would provide the land and assist with relocation of affected households. The contract stipulated that SoLL would pay for the relocation, land, and a portion of infrastructure and redevelopment of the site. This agreement provided SoLL with the development rights for the entire Taipingqiao neighborhood. The title of each parcel within the neighborhood would then be negotiated and transferred one-by-one within a 10-15 year timeframe. In this way, the Municipal and District Governments maintained a certain degree of autonomy in their partnership with the investor and developer.

SoLL gave the two blocks consisting predominantly of the Shikumen architecture and Linong layout the name “Xintiandi”, meaning New Heaven and Earth for branding and marketing purposes. This evoked the goal of the Master Plan of Shanghai (1999-2020), which called for the development of a world-class city. In order to achieve this, the quality of life needed to be improved to attract international talent. Xintiandi was thus planned to accommodate commercial, retail, catering and entertainment spaces with special historic characteristics.

The master plan of Taipingqiao Redevelopment Project was finished in 1996, and approved by the Shanghai Municipal Government in 1997. The Luwan District Government then started to prepare a DCP to define the specific Floor-Area Ratios (FAR), green space ratio, height limits and other parameters and specifications for each block. Within the 23 blocks of the Taipingqiao area, the two blocks containing the Shikumen buildings were to be preserved, renovated, and redeveloped into entertainment and commercial venues. However, only the North block was ever completely preserved due to financial pressures to intensify development, which took over part of the other block.

The Master Plan of the Taipingqiao Neighborhood allowed for a 10-15 year development process, starting from the southern residential area. The investment return from housing was supposed to support the construction of the Taipingqiao Lake and Park. The historic preservation of the site of the First National Congress of the Communist Party of China would be implemented at a later stage, according to the plan.

The Shanghai Municipal Government has responsibility for planning approvals, and the District Government and its planning administration are responsible for developing the detailed plans. The District Government usually works in collaboration with landowners, including state-owned corporations and semi-public developers, such as development corporations (which, in turn, are supported by the district government and private developers). The Municipal Government has always been in charge of providing permits to development projects in designated areas of special significance, such as the Taipingqiao Neighborhood.

With limited tax revenues, land rents have gradually become the main source of financing for city governments. Indeed, they have helped to create rural-to-urban land redevelopment opportunities, enabling the government to fund city infrastructure needs. Land became a saleable commodity in the late 1980s, when land use rights were first rented to developers. However, city governments maintain full ownership of the property rights and the power to allocate and utilize land resources through directives rather than through market pricing mechanisms.

The total cost of the project amounted to approximately RMB 1.4 billion (about USD 228 million) for the two blocks of Xintiandi. Due to the complexity in renovating the historic buildings, however, the estimated cost for Xintiandi doubled. The estimated compensation paid from SoLL to the local government for the relocation of 2,300 households was approximately RMB 600 million (about USD 75 million). The Xintiandi development project costs were considered a large investment for an area with a physical footprint of only 3 hectares. In the end, the project was not profitable; SoLL broke even on its investment.

While it was agreed that all residential properties included in the master plan would be sold to generate cash flow, the Xintiandi development has not been offered for sale, per se. SoLL collects rental money in order to maintain the quality of the housing for the tenants. The long time frame of the project reduced SoLL’s profit and lengthened the payback time. The reason SoLL could afford to invest in Xintiandi was that it was given 52 hectares of the Taipingqiao redevelopment area to balance the costs.

The Xintiandi project officially started at the beginning of 1999, with the construction of Taipingqiao Park launched in 2000, which was completed in 2001. After the visit of former National President Jiang Zemin to the site in 2001, the development quickly caught both national and international attention. The construction of an office complex, the “Corporate Avenue”, and a luxury residential building called the “Lakeville” were then initiated. Later, as the adverse effects of the Asian Financial crisis diminished, the whole project entered into an accelerated development phase.

Although the original plan was to start with the development of the property and office complexes, the Asian Financial Crisis decreased demand for office space. In response, SoLL adjusted the phasing, giving priority to historic preservation. In the meantime, the Municipal and District Governments decided to initiate the construction of the Taipingqiao Park. The modified phasing aimed to mitigate market risks and improve the reputation of the project.

The relative success of the Xintiandi project helped establish it as a brand, with other Chinese cities undertaking Xintiandi-type projects. As a result, SoLL has started similar projects in other major cities, including in Wuhan, Chongqing, Foshan and Dalian.

The redevelopment of the Xintiandi area generated significant socio-economic, political, and cultural benefits. The public benefits of the project include the construction of the Taipingqiao Park and Lake, which increased green, public spaces in the central city of Shanghai. The Xintiandi project and the surrounding Taipingqiao area fulfilled the development goals of promoting and internationalizing Shanghai’s new amenities to attract and retain professionals in the City.

However, neither the value created nor the amenities developed have directly benefited the original residents. While the local residents’ demands for improved living conditions were met, this was done through mass relocation to new buildings located at a distance from jobs and economic opportunity.

Based on the lessons learned in Xintiandi, future redevelopment initiatives should consider the following:

• An initial draft master plan or urban design framework can provide an appropriate discussion tool for the developer to reach a consensus with local public officials, as well as other stakeholders from the outset.
• Ongoing implementation of the plan – despite unfavorable and/ or unforeseen circumstances – can help to reassure developers and investors in their expectations about profits and/ or property values.
• Encasing the redevelopment of a special area within a larger area as a whole can be helpful in balancing the long-term costs and benefits.
• Cultural heritage should be considered an asset and a form of capital that can enhance the identity of a place, generating and even raising property values.
• Consistency in local government ideas and priorities for the project is important, especially in longer-term redevelopment efforts.