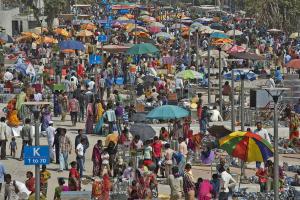 Ahmedabad has always had a strong connection with the Sabarmati River. However, growing industrialization resulted in environmental degradation of the river. Since Sabarmati was a seasonal river, it ran dry for 9 months of the year and carried water mostly during the monsoon season. The dry riverbed and riverbanks were used for farming and a regular weekly market, Ravivaari. A number of informal settlements arose along the riverbanks, reducing direct access to the river. The riverfront settlements affected the river’s flood carrying capacity and exacerbating the affects of seasonal flooding.

Over time, these informal riverfront settlements encroached to the bank of the river. Therefore, there was no more public access possible along the length of the river, as well as little access to the bed of the river. As a consequence, the only places from which the river could be enjoyed by citizens were the bridges. The initiative to revitalize the Sabarmati Riverfront envisioned making it possible for all of Ahmedabad’s inhabitants to enjoy riverfront access and amenities.

After 1975, Ahmedabad went through a period of economic downturn due to the closing of many textile mills, and growth only resumed again in the mid-1990s following the economic liberalization India initiated in 1991. In this context, one of the prominent local politicians convinced the Municipal Commissioner of Ahmedabad to enable the Ahmedabad Municipal Corporation (AMC) to undertake an ambitious revitalization of the riverfront. The recent redevelopment of C G Road in Ahmedabad had just been completed as a self-financed project and provided many lessons for the Sabarmati Riverfront Development Project.

The Sabarmati Riverfront Development Corporation Limited (SRFDCL), was established as a wholly-owned company by the AMC and a few other minority shareholders. It was decided that the Board of Directors of this Special Purpose Vehicle (SPV) would comprise a coalition of stakeholders because it was clear that such a complex project could not be undertaken by the Municipal Commissioner alone. The company was conceived as a development company with a mandate to plan and implement the Sabarmati Riverfront Development Project.

With the SPV in place, the Board commissioned a feasibility study from a not-for-profit urban planning and urban development management firm (Environmental Planning Collaborative, EPC). The proposal called for training the width of the existing river to 275 meters in order to reclaim approximately 162 hectares / 400 acres (which subsequently increased to 200 hectares / 494 acres) spread along nine kilometers (which subsequently expanded to 12 km) of the river banks. According to the proposal, 20 percent of the reclaimed land was to be sold to finance the entire cost of the project while the rest was to be used for new streets, parks and development of other civic amenities. A key feature of this proposal was a continuous promenade along the east and west banks of the river.

At the outset, the project was envisioned as a multidimensional environmental improvement, social uplifting, and urban rejuvenation project. Key objectives were to:

During the planning phase, the SRFDCL Board needed to agree on a strategy for implementation. There were three broad options: (i) building in-house capacity; (ii) partnering with a private real estate development firm; or (iii) hiring private sector consultants to oversee development management services.

The Board chose to outsource the development management services in order to best leverage the SPV’s merit of making quick decisions and not having to partner with public or private sector staff. In 1999, the EPC was appointed as development manager for the initial stages of project planning and implementation of the Sabarmati Riverfront Development.

From the outset, the SRFDCL was conceived as a development company with a mandate to plan and implement the Sabarmati Riverfront Development Project. The concept plan prepared by SRFDCL would need to be approved by the state government. The AMC would simultaneously ask the State government to transfer the ownership of the riverbed land to be reclaimed through the project to the Municipal Corporation. Subsequently, the AMC would make an agreement with the SRFDCL to reclaim and develop all land in return for 20 percent of the reclaimed land. This land would then be transferred (after public auction) to its final purchasers at the request of the SRFDCL, thus saving on multiple transactions and associated taxes while remunerating SRFDCL adequately for its costs.

There were many reasons for such an arrangement. First, the SRFDCL would be able to use the agreement and the pledged land as collateral to borrow funds commercially as needed. Second, by keeping the land under the ownership of the AMC, the SRFDCL was prohibited from becoming an asset-rich company. At the time, it was also understood that once the project was implemented and completed, the company would be dismantled and the AMC would take ownership of all public areas and maintenance responsibilities.

Various government departments had key roles in the implementation of the project. The Revenue Department controlled the riverbed land to be reclaimed by the project, which needed to be transferred to the AMC for the project to move forward. The Urban Development Department needed to amend the city’s development and building regulations at the appropriate time based on the recommendations of the proposal. The Gujarat Infrastructure Development Board (GIDB) was an important stakeholder as SRFDCL was seeking seed funding to undertake critical technical studies to improve the details of the proposal. The Irrigation Department was responsible for approval of all river hydraulics and related studies. A design workshop, anchored by the development managers of EPC, was also organized in 2000 to engage with Ahmedabad’s community of architects and planners.

According to the original proposal, a portion of the reclaimed riverfront land was to be auctioned to cover the cost of development. However, due to various factors, the pace of implementation has slowed, delaying the auction of the land and necessitating other financing measures. The Redevelopment Project was instead funded via loans from HUDCO, a large national level infrastructure funding agency, and from the AMC.

At the time of the concept plan and feasibility study, the cost of the project was estimated to be 361 Rupee crores (USD 60 million). It was estimated that sale of 20 percent of the total reclaimed land would generate 458 crores Rupees (USD 76 million), enough to cover the cost of all capital improvements, resettlement, organization and interest on loans.

After the preparation of the Feasibility Study, the Gujarat Infrastructure Development Board was approached for a small 1.31 crore Rupee (USD 218,000) project development loan. These funds were used for engaging a financial consulting firm to prepare a detailed and convincing project financing strategy

With the help of this strategy, a number of commercial financial institutions were approached for loans. However, AMC gained access to additional funds and itself issued loans for pilot project construction. In 2004, HUDCO was also approached for a loan. As collateral toward the loan, existing serviced land under AMC ownership was pledged. In total, loans of 681 crores Rupees (USD114 million) have been taken from HUDCO against a total expense of 1272 crores Rupees (USD 212 million). A total amount of 900 crores Rupees (USD 150 million) has already been approved. However, in order to access the remaining amount, AMC may need to place additional land as collateral.

The AMC has also been granting loans to the project on an ongoing basis. To date, AMC has loaned 350 crores Rupees (USD 58 million). The remaining sources of funds, approximately 241 crores Rupees (USD 40 million), has been in share capital sold by the SRFDCL. As a wholly-owned subsidiary, the shares are under the ownership of AMC.

Apart from capital revenues, a number of avenues of operating revenues have been identified during the course of the project such as charging user fees for accessing parks and gardens. There are also concession agreements for food and other stalls, which contribute to the operating revenues. Lease revenue is also realized from currently undeveloped grounds on the riverfront, which are being used for citywide events.

The inauguration of the project in 2003 at the hands of the Chief Minister caused significant concern among the project-affected households in the informal settlements. These households decided to take legal recourse by filing a Public Interest Litigation (PIL) against the state and the project. They argued that they should be resettled in close proximity to their existing place of livelihood. The court placed a pause on any eviction until a full relocation and rehabilitation (R&R) plan was placed in front of the court. By the time the AMC R&R plan of 2008 was finalized, the national government had initiated a scheme to provide a national subsidy for providing housing to people below the poverty line or those in an economically weaker section (EWS). Through this scheme, the AMC proposed that the relocation of the project-affected households be done on municipal owned land far from the riverfront, causing some backlash and negative social consequences.

Early on, the project planners discarded the use of land acquisition as a means to appropriate the land necessary for redevelopment of the riverfront. They adopted a method similar to melavni in order to realign land so that the boundaries of private lands could be streamlined and organized. Melavni — which means ‘to match’ in the local language — is a part of the process of town planning schemes by which the records of land ownership are reconciled between paper records and the actual on-the-ground ownership of land (Ballaney 2008).

This process produced a final overlay plan, which was used to determined which parcels would be impacted by the development (i.e. would be reduced in size) in order to set a basis for consultations with the owners for compensation. Landowners were offered development rights of the lost area of land or cash compensation.

Stage 2 – Launch (2003): The project was formally launched by the Chief Minister of State in 2003. However, the Commissioner of Ahmedabad decided to move the project further northward for unclear reasons. This would have placed the entire project outside the city, undermining its role in urban revitalization. The hasty change for approval undermined various members of the board. Before the idea of moving the project northward could materialize, however, the Commissioner was transferred, saving the project.

Stage 3 – Pilot Projects and Key Infrastructure (2004 – 2010): In 2004, the construction of the pilot project was initiated to finalize technology for constructing the retaining walls. After this pilot process was completed, contractors were selected from several rounds of proposals and construction was initiated in 2007.

Stage 4 – Significant Completion and Use (2011 – Present): Major infrastructure improvements were undertaken from 2007 to 2009 including the construction of underground interceptor sewer lines along both banks and diaphragm walls. Given that the construction posed little threat to the informal settlements in the vicinity, no significant relocation was undertaken at this time.

Relocation commenced beginning in 2010 for the development of the upper level promenade and streets. From 2011 onward, sections of the riverfront development started to open to the public. To date, a majority of the lower promenade and two public parks have been opened, and the alternative site for the Ravivaari has been opened as has the Dhobighat. Several elements have not been constructed, such as a city level exhibition and conference facility and a large Ferris Wheel.

To date, a significant portion of the project and a number of public amenities associated with the riverfront have been completed and opened for public use. As of June 2014, 85 percent of the entire stretch of the project has been completed. This includes the entire stretch of the lower promenade, the majority of the interceptor sewer line on both banks and the pumping stations, as well as the majority of the fill portions of land. In addition, the relocation of all project-affected households has been completed, albeit to varying degrees of success. The planning for redevelopment of adjacent areas has also been initiated through a development plan prepared by the Ahmedabad Development Authority. However, some project elements such as the sale of reclaimed land have not yet taken place.

A number of key lessons emerge from the process of planning and implementation of the Sabarmati Riverfront Development project: